How I See Numbers

*Please see the associated Hacker News comments for some interesting discussion related to this article.*

When doing any sort of mental arithmetic or visualization of quantities, I picture numbers as shapes. In my head, operations like addition and subtraction manifest themselves as physical interaction between these shapes, and are complete with sounds and tactile feelings.

It only struck me recently that this might not be how most people experience numbers. In fact, this document is my first ever attempt to communicate this information with someone else. It was surprisingly difficult for me to represent the shapes and sensations given that I can conjure them so easily within my own head, but hopefully the following combination of drawings and words gets the point across.

One, like its written form, is just a line. It’s solid and indivisible. Two is a pair of ones, stuck to one another by a sort of invisible force. This force is quite strong. If overcome, the component ones can be peeled cleanly apart - like separating two slices of Kraft singles that have been stuck together (weird analogy, but that’s exactly how it feels.) 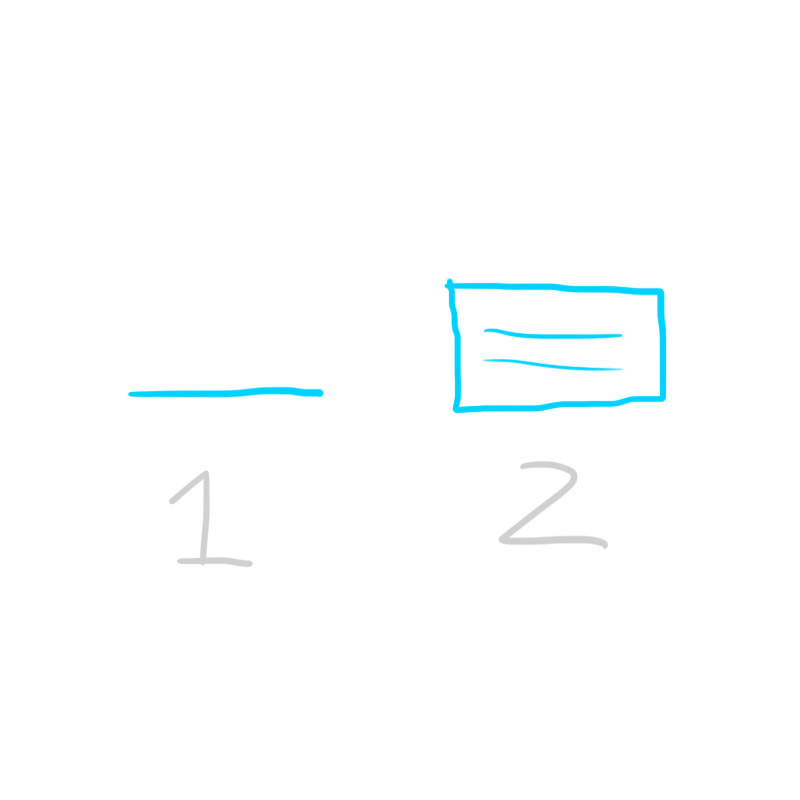 All of the even numbers are very neat and square. They stack nicely to combine into one another, and separate just as easily into pieces of two, like Lego bricks. The numbers that add to ten have an especially strong attractive force between them. They nestle into one another and don’t want to be pulled apart. The smaller of the two numbers always stacks on top of the larger, never the other way around. 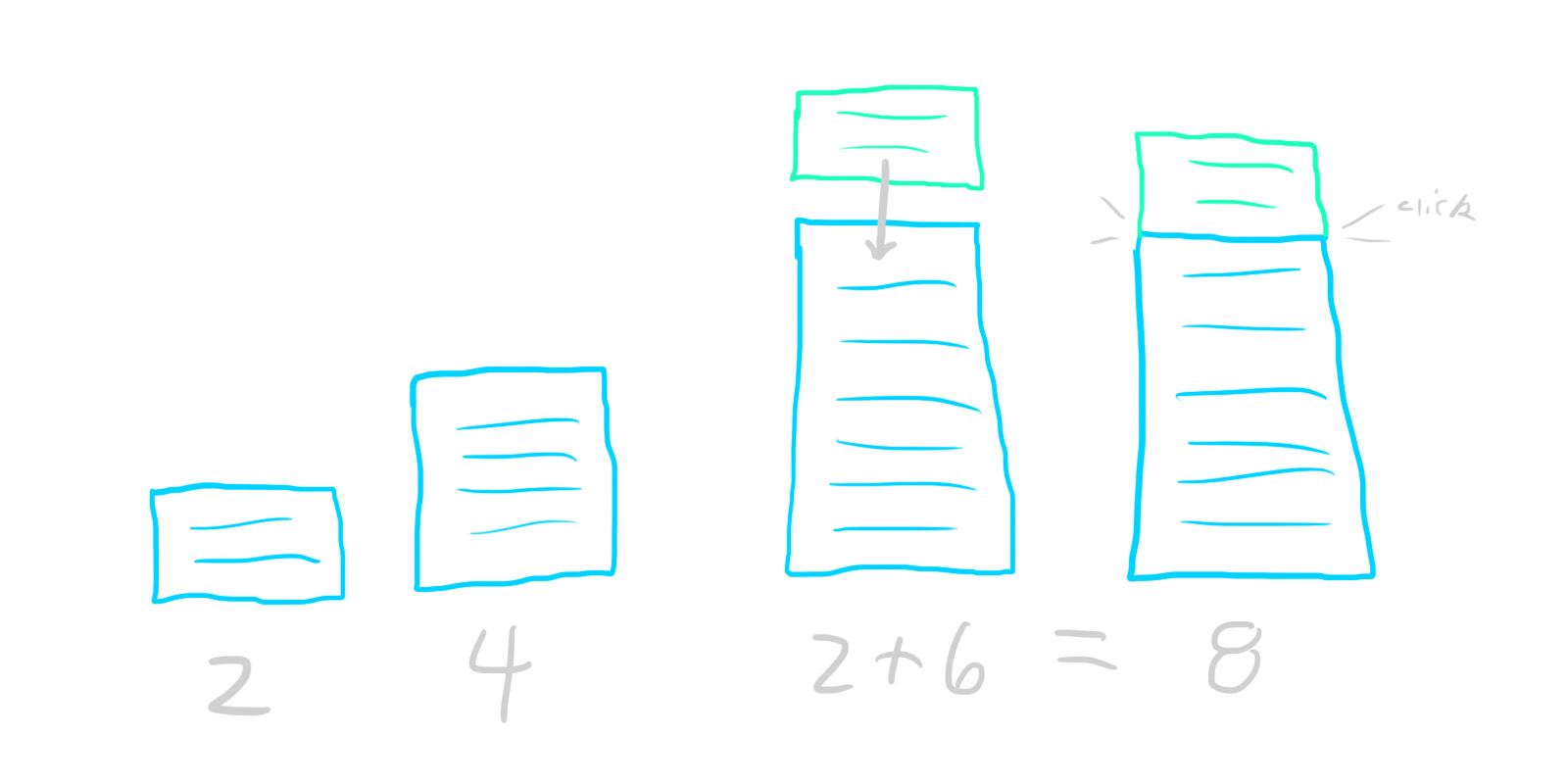 In contrast with the pristine, cookie-cutter evens, the odds are much more organic. Three is quite round, like a one draped lazily over a two. Seven is the opposite, with a concavity that the three is designed to slot into. Just like with the evens, the odds want to latch together to join into a ten. 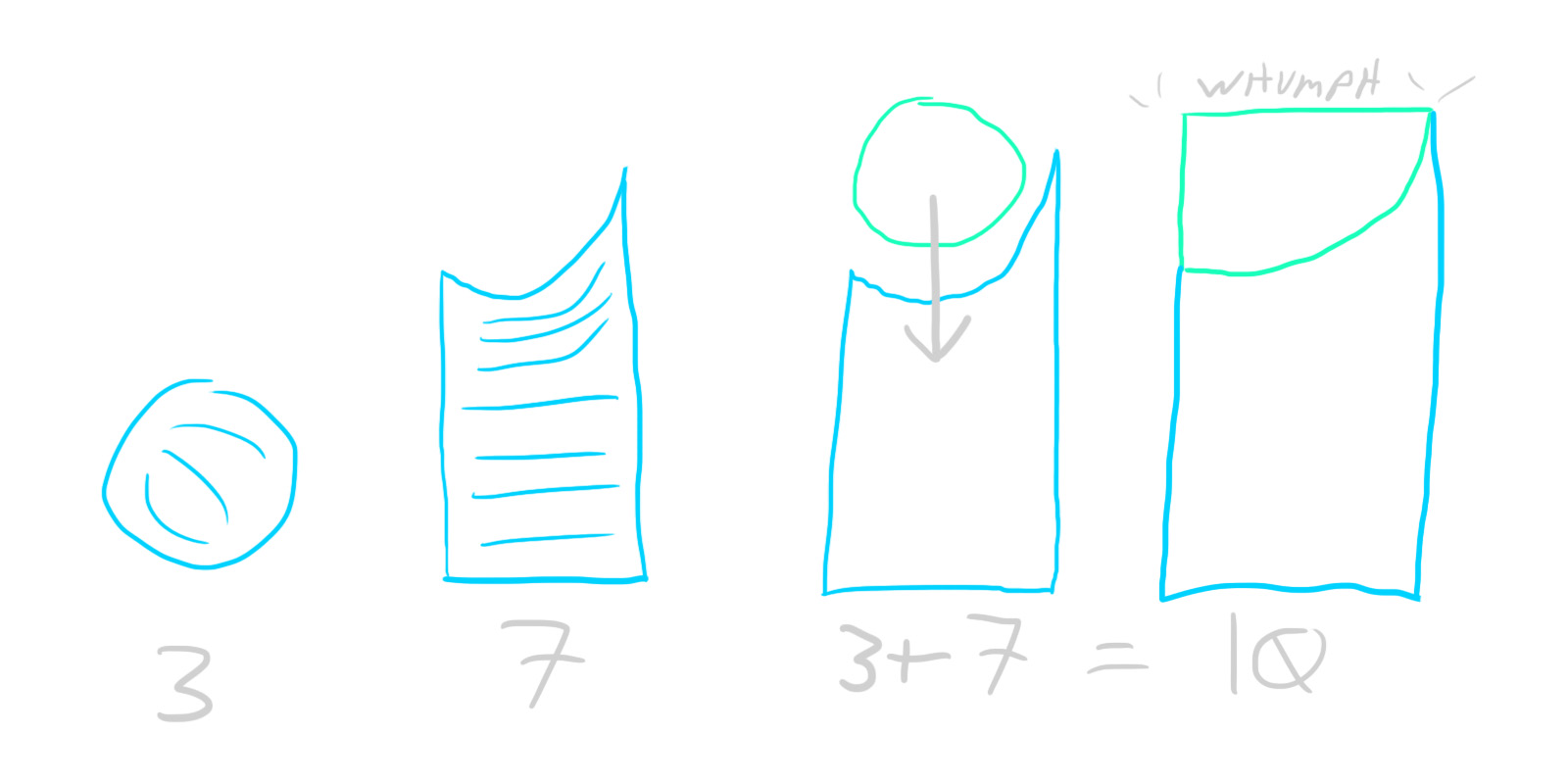 Nine is a monolithic block with a slot gouged out of it, for receiving a one. It functions like a hook, peeling off a one from any number it’s added to. This process leaves behind a nice, complete ten and one other digit - the reduced form of the other addend. 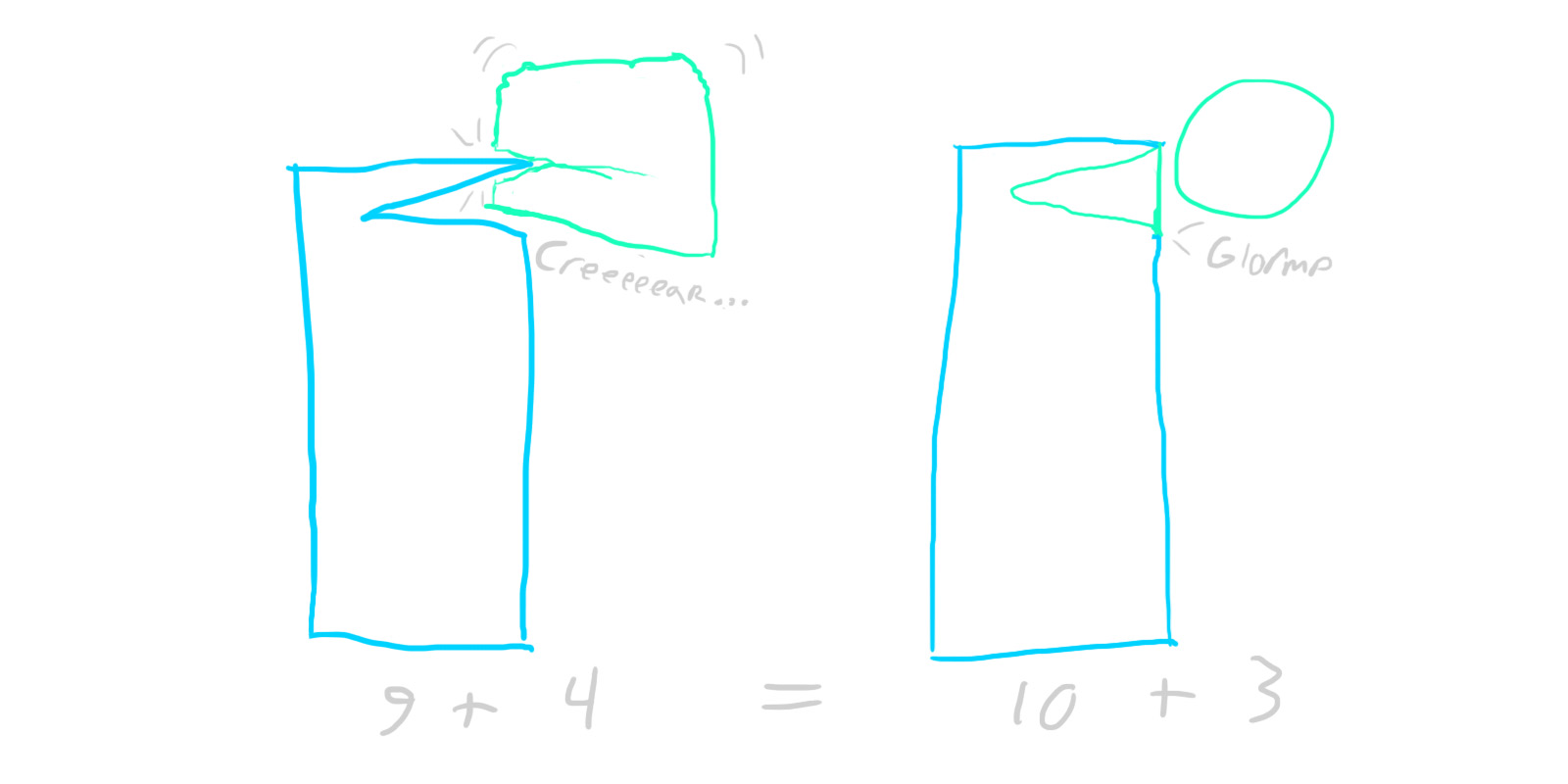 Numbers tends to vary their form contextually. Five, for example, can either be a two balanced delicately atop a three, or a four with an additional hook-like protrusion - much like the top half of a nine. The form any given five takes on depends on where it’s come from or what I need to do with it. In the presence of a seven, the five morphs into its two plus three form. The bottom half squishes into the top of the seven and the two on top just slides right off. In the presence of another five, both assume the hooked form and interlock to form a perfect ten (though this is the weakest feeling bond of all the numbers adding to ten.) 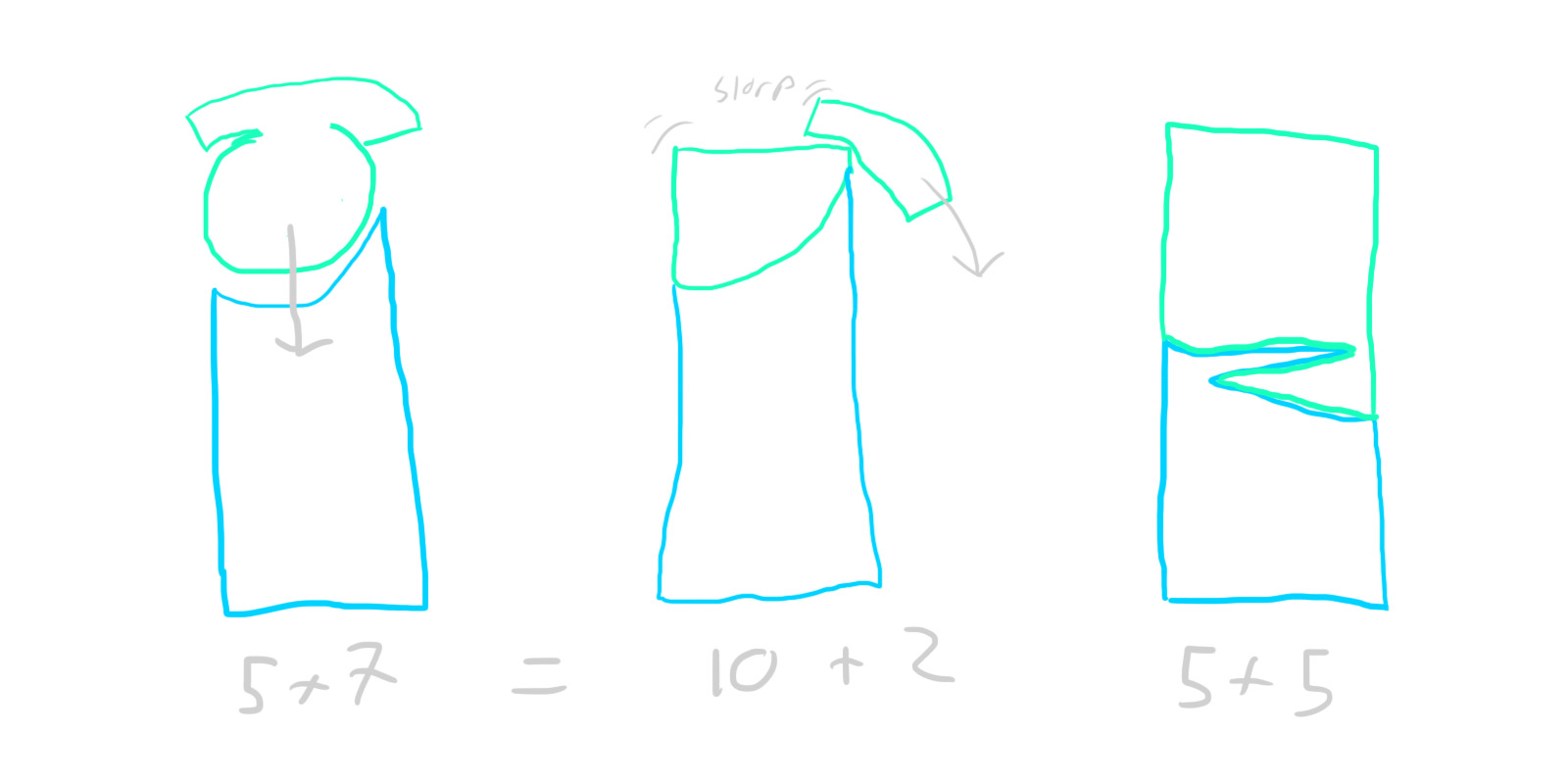 As orders of magnitude change, the feeling of each numerical interaction stays the same, but the scale of the effect grows or shrinks accordingly. Adding 0.25 and 0.25 feels like the sharp click of glove compartment latch, whereas 25 plus 25 feels like slamming a trunk closed - the same mechanisms at play, but much more forceful and solid at larger scales.

Beyond the first ten natural numbers, some have unique forms, but most do not. Instead, I’ll usually just break numbers up into their component base ten digits and do any sort of interaction with other numbers on a digit-by-digit basis.

And that’s all that I’ve got - hopefully this has been interesting! I find it funny that people can experience such different things when thinking about something so simple, and it scares me a bit knowing that I’ll never fully understand anything other than how it happens in my own head.

On the other hand, maybe you’ve been nodding along this whole time going “yup, that’s exactly how I see numbers too!” and none of this is a surprise to you.

Actually, that scares me a hell of a lot more. I prefer to believe that we all see things a little differently :)